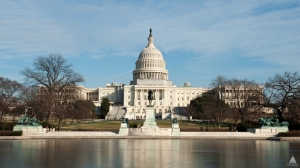 Capitol Reflecting Pool. Photo from Architect of the Capitol

As discussed in the last Federal Policy Week posting, House and Senate Committee memberships and Chairs will change on many Congressional committees. I will keep you updated on changes as they happen to both the authorizing committees and the Appropriations Committee in the both the House and Senate.

For now, The Hill provides a preview of some of the expected changes in the House (many Committees in the House will remain largely unchanged). Some highlights on the races for Chairman for several relevant Committees outlined in the article appear below.

As many as 11 House committee chairmanships will be in play this month, as Republicans choose their leaders after a triumphant midterm election cycle. Chairmen are generally picked by the House Republican Steering Committee, made up of members of the leadership team and Speaker John Boehner (R-Ohio); existing panel chairmen; 11 regional representatives; and representatives of the 2010 and 2012 electoral classes…. The Steering Committee will conduct interviews with candidates next Monday and Tuesday and then offer its recommendations. The full House GOP conference must then ratify a list of the new chairmen at a meeting planned for Nov. 19….

Natural Resources: Exiting: Doc Hastings (R-Wash.), who is retiring In: Rob Bishop (R-Utah) Bishop is the front-runner to take over the panel; Rep. Don Young (R-Alaska), the panel’s senior Republican, has already served as chairman. Next in seniority is Rep. Louie Gohmert (R-Texas), but on Wednesday, his office told The Hill that he would support Bishop. Bishop, who serves on the powerful House Rules Committee, is considered someone leadership can count on. The Utah Republican chairs the Public Lands and Environmental Regulations subcommittee…

Budget  Exiting: Ryan In: Tom Price (R-Ga.) Assuming Ryan wins the Ways and Means gavel, there will be an opening at the helm of the House Budget Committee. Price, the panel’s vice chairman, is widely expected to take over….

Agriculture Exiting: Frank Lucas (R-Okla.), who is term-limited In: Mike Conaway (R-Texas) Conaway is considered the front-runner for the chairmanship, even though he isn’t the highest in seniority. A prolific fundraiser, Conaway is the current chairman of the panel’s Subcommittee on General Farm Commodities and Risk Management, which oversees crop insurance, commodity exchanges and markets related to cotton, wheat, rice and beans. He’s also in his first term as House Ethics Committee chairman.

We know that in the Senate Republicans will now take over all Senate Committees with the top Member of each committee being the Chairman and the top Democrat being the Ranking Member. Further, the balance will shift toward the Republicans who will have great representation on each Committee. I will keep you posted as leadership and membership on key Committees evolves. Some expected changes include:

Environment and Public Works Committee: Senator Inhofe (R-OK), a well-known climate skeptic, is expected to take over as Chairman.

Energy and Natural Resources: Current Ranking Member Senator Murkowski (R-AK), a champion of oil and gas and opening ANWR for exploration, is expected to take over as Chair.

About the Author: Alison Fox